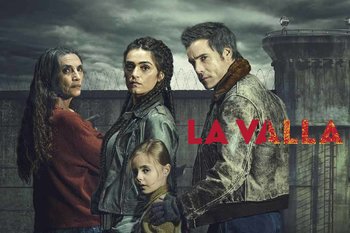 The Barrier (La valla in Spanish) is a Spanish dystopian series set in Madrid created by Daniel Écija. It was first released in Spain in January 2020 before seeing an international release in September 2020 on Netflix.

In an alternate version of 2020, Spain's involvement in World War III in a time of already-dwindling resources results in great environmental damage, limited availability of essential resources and a collapsed economy. New diseases emerge, overburdening hospitals. Just as a dictatorial government takes power, the army comes knocking at the door of a family of four as they are packing to leave their home. The father, Ramón, implants each of his young twin daughters, Julia and Sara, with a subcutaneous chip of unknown nature. The door can only resist assault for so long, and Ramón is taken away, leaving the girls in the care of their mother, Emilia.

Twenty-five years later, the consequences of the political upheaval, coupled with the circulation of the deadly noravirus, results in movement between different towns being limited. In Madrid, the capital, there is a fortified wall, the titular barrier, separating Sector 1, which houses the government officials and other elites living in luxury, from Sector 2 and its population living on limited resources.

Sara has recently succumbed to the noravirus and passed down her chip to Marta, her ten-year-old daughter. Fulfilling Sara's last wish, Marta, her father Hugo and her paternal uncle Álex leave the Asturias region to move to Madrid, where Emilia and Julia live. When asked about Sara at checkpoints, they claim she’s still alive and will join them in a few days to keep out of trouble. As the three of them are getting registered, Marta tests positive for an unspecified blood test given to new entrants and is promptly taken away. Hugo and Álex are told by the first person willing to give them answers that she's being taken to a colony for the children of unemployed parents, and that she’ll be given back if Hugo can provide proof that he has a job in Madrid. Emilia calls her former boyfriend Luis, now the Minister of Health, who is fortunately looking for house staff. The coverup of Sara's death backfires when Hugo finds out that his would-be employers are looking to hire a married couple for the job during the interview. Unbeknownst to Hugo, the obvious solution of passing Julia off as Sara has a big drawback: Julia just recently killed a high-ranking military officer in self-defense, the sole direct witness fled the scene before she could, and she's being part of the family reunion only for the time it will take for her boyfriend Carlos to arrange an escape for the two of them. To top things off, Marta hasn’t actually been taken to a colony for the children of unemployed parents, either; she was taken to a scientific institute trying to Find the Cure! for the noravirus, headed by Alma, Luis' wife, who is willing to risk the life of children for The Needs of the Many.

The above it the plot of the first episode alone, with the following ones having a similar average density of surprises in stock for the viewer. Because of this, it will be hard to read any further without getting spoiled.

For your safety, this series contains examples of:

The future belongs to us.