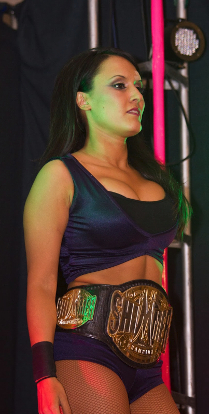 The fifth recipient of Cauliflower Alley Club's Future Legend award, Melissa Anderson (born August 17, 1982) is an American professional wrestler/manager/valet from Los Angeles, California best known for her work in SHIMMER as Cheerleader Melissa and in TNA as Raisha Saeed and as Alissa Flash. She debuted in 1999 in the California independent scene as the valet for the tag team the Ballard Brothers after training in Billy Anderson's school. She had her first match on her 17th birthday, a loss to Lexie Fyfe.

She would go on to compete for many promotions around the world, being personally invited to work for Aja Kong's ARSION and German Stampede Wrestling. Among her in-ring achievements, she is a Trans-Atlantic Champion, a 2x SHIMMER Champion

, the inaugural and 2x All Pro Wrestling Future Legend Champion

, is a 2x a Pro Wrestling Revolution World Women's Champion

Melissa made her Lucha Underground debut in 2016, working under the masked gimmick Mariposa.

Tropes of a Future Legend: