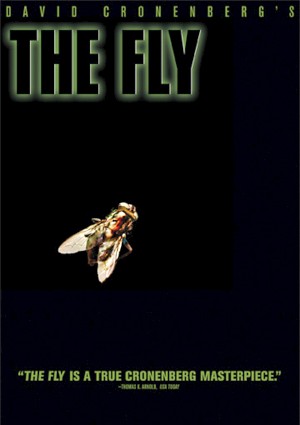 "Be afraid. Be very afraid."
"What am I working on? Uhh... I'm working on something that will change the world, and human life as we know it."
— Seth Brundle (opening line of the film)
Advertisement:

The Fly is a 1986 Sci-Fi Horror film directed and co-written by David Cronenberg, serving as an In Name Only adaptation of a 1957 short story of the same name, and the second film adaptation of the story after The Fly (1958).

This time, mild-mannered but brilliant quantum physicist Seth Brundle (Jeff Goldblum) is on the cusp of perfecting his matter transporter after meeting reporter Veronica Quaife (Geena Davis), the love of his life. The happiness is too good to last, as he is accidentally fused with a common housefly on a molecular-genetic level in a seemingly successful transportation experiment. Rather than creating an immediate monster, a slow metamorphosis begins. Soon, Veronica must cope with the pain of watching her lover literally fall apart on a physical and emotional level — and the awful uncertainty of whether the child inside her was conceived before or after the fateful transportation...

The Fly II, a B-Team Sequel as Cronenberg and his Production Posse had moved on to Dead Ringers, followed in 1989 (and itself saw a comic book continuation in 2005). In 2008 this became one of the few horror films in history to be adapted into an opera — no, seriously — with music by the film's composer, Howard Shore.

In terms of tropes, this movie is the Trope Codifier for both Slow Transformation (especially in visual media) and Gibbering Genius.

Now has a character sheet; note that spoilers are unmarked there.

Tropes specific to the 2008 opera adaptation:

Having been merged with a fly at the genetic level, Seth Brundle has undergone a series of hideous mutations. However, after accidentally getting his decomposing jaw ripped off, he undergoes a stomach-churning metamorphosis into his final form...

Having been merged with a fly at the genetic level, Seth Brundle has undergone a series of hideous mutations. However, after accidentally getting his decomposing jaw ripped off, he undergoes a stomach-churning metamorphosis into his final form...