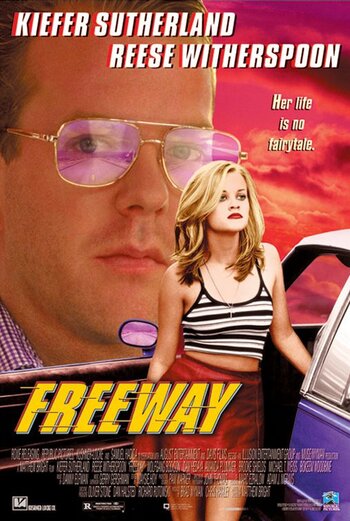 To Grandmother's house we go.
"You shoulda let me out of the car when I asked you to, Bob. You see where bad manners get you?"
Advertisement:

When young, spunky, illiterate teen Vanessa Julia Lutz (Witherspoon) comes home from school one day, she sees her prostitute mother (Amanda Plummer) and abusive, drug-addicted stepfather (Michael T. Weiss) get carted away by the police. Not keen on being sent to another abusive foster home, Vanessa slips away from her social worker, grabs her red leather jacket and a wicker basket, and heads out to her grandma's house in Stockton, California. Meanwhile, police are on the hunt for the I-5 killer, who murders young girls and dumps their bodies on the Interstate 5 freeway.

Along the way, Vanessa's car breaks down, and she's stuck on the side of the titular freeway. As luck would have it, a kindly, charming psychiatrist named Bob Wolverton (Sutherland) picks her up... and with a big grin, leads her away from the road.

A sequel, Freeway 2: Confessions of a Trickbaby, was made without any connections to... well, anything.