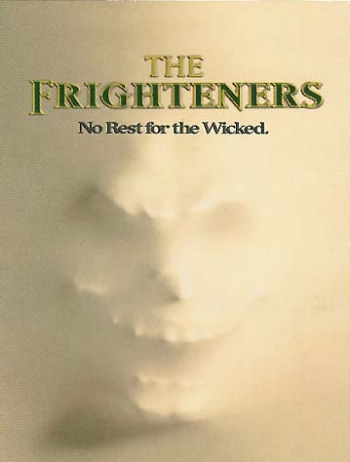 "Death ain't no way to make a livin'!"
— The Judge
Advertisement:

Michael J. Fox is Frank Bannister, a "freelance exorcist" who's not quite as phony as he appears. Having gained the ability to see and talk to the dead after a tragic car accident, Frank sends his three ghostly accomplices—white n' nerdy Stuart (Jim Fyfe), black swinger Cyrus (Chi McBride), and cowboy corpse The Judge (John Astinnote Astin is the adoptive father of Sean Astin, who would go on to play Sam Gamgee in The Lord of the Rings. According to Sean, it was John who persuaded him to take the role because he (John) had enjoyed working with Jackson so much.)—to wreak paranormal havoc in the homes of wealthy clients-to-be. These people call Frank, he shows up to perform an "exorcism," then takes off with the cash. He's the world's greatest con man... until dozens of perfectly healthy people in his hometown of Fairwater, California start dropping dead from cardiac arrest—the very same people who suddenly acquired numbers carved into their foreheads that only Frank can see.

Soon after one of these victims, Ray Lynskey (Peter Dobson), becomes a ghost and pleads Frank to help him find his way toward the light, Frank and his undead buddies discover the cause of the phenomenon: A malicious spirit in the form of The Grim Reaper (Sinister Scythe included) has gone on a mad killing spree, literally squeezing the life from his victims' hearts. And not only that, it appears he has the ability to even kill ghosts by forcing them to move on to the next world. Frank and Dr. Lucy Lynskey (Trini Alvarado), Ray's widow, hatch a radical plan to put an end to the murders, but along the way, they must deal with Milton Dammers (Jeffrey Combs), a maniacal FBI agent (basically a cross between Mulder and Hitler) who believes that Frank is psychically killing the murder victims, and will go to Hell and back to see him brought to justice.