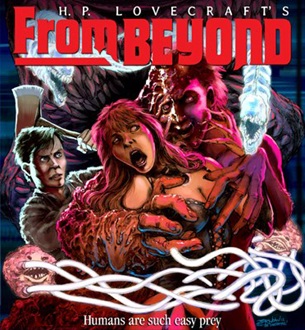 From Beyond is a 1986 film directed by Stuart Gordon, based on the short story "From Beyond" by H. P. Lovecraft. It reunites the people who made Re-Animator, based on another of Lovecraft's stories.

The story is about a scientist named Crawford Tillinghast who has invented a machine that — partly by stimulating the pineal gland — allows its users to see the vast and terrible layers of reality that coexist with the world perceived by the five senses.

As the film opens, Tillinghast (Jeffrey Combs) activates the "resonator" (basically four large tuning forks connected to a giant computer), which glows hot pink and allows him to see eel-like creatures floating in the air. One of the creatures attacks him; he shuts the resonator off and runs to tell his mentor/collaborator, the kinky Dr. Pretorius (Ted Sorel).

Pretorius cranks the machine up to 11 and revels briefly in all the new sensations it gives him. Then something eats his head.

Tillinghast is charged with Pretorius' murder and confined to a mental institution. But "girl wonder" psychiatrist Dr. McMichaels (Barbara Crampton) sees a pattern in Tillinghast's ravings and suspects he may be telling the truth. She has him released into her custody and the two of them, accompanied by a policeman (Ken Foree), return to the house where the whole mess went down.

Repeated experiments with the resonator bring Pretorius Back from the Dead with a fresh new attitude and a few extra appendages, make McMichaels the recipient of the most revolting screen "kiss" ever (and later induce her to don some fetishwear that happens to be lying around), and leave Tillinghast bald, traumatized, and covered in goo.

When the resonator is switched on (extradimensionally, by Pretorius) for the last time, Tillinghast's pineal gland pushes through his skull and pops out of his forehead on a stalk. Transported to a hospital, he goes on a brain-eating rampage which eventually takes him back to the house, where he tries to de-brain McMichaels as she attempts to blow up the machine. She counters by biting off his gland in a scene nearly as gross and fully as symbolic as her kiss from Pretorius.

Finally, Pretorius and Tillinghast battle one another to the gooey, gory death. McMichaels succeeds in destroying the laboratory, but when she tries to tell her story she is confined in the very institution at which she used to work. So it goes.

Not to be confused with The Beyond.