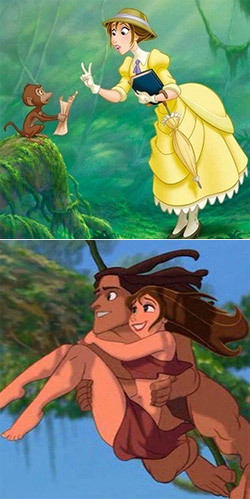 All dressed up from head to toe to mostly undressed from head to toe.
"I bet when Scully took her exams to become a Doctor she never foresaw a day when she would be suited and booted in riot gear, clutching onto a forbidding firearm, and taking part in a domestic terrorist sting."
— Doc Oho

on The X-Files, "Tunguska"
Advertisement:

The Adrenaline Makeover is a particular form of Character Development for action genre entertainment that disguises itself as a Love Trope. It's what happens to a Shrinking Violet, or a Girl Next Door who finds herself embroiled in an adventure situation. It is most common in movies, but has been known to turn up in other media.

The Adrenaline Makeover candidate is almost always or was Beautiful All Along. But at the beginning of the story, our heroine is mousy, shy, wearing the bad glasses, the frumpy clothes, etc.

Sometimes she's secretly, unknowingly, the Hot Librarian, or a case of late-blooming gorgeous. Sometimes she's gorgeous but shy, mild-mannered, aloof or standoffish because she has to work twice as hard to be thought of as half as good in a male-dominated field, being sexy equals not being taken seriously, and women are punished for displaying any aggression. If she is used to being overlooked for being mousy and plain, this can also result in I Can't Believe a Guy Like You Would Notice Me at some point during the transformation.

The usual progression of the trope has the character starting out blinded to the world by their academic pursuits. She's in trouble that she needs assistance to get out of, resulting in a hero showing up and helping her through an epic adventure. The adventure distracts her from maintaining her frumpiness; the hero is there to rescue her, to help her de-frump, and to fall in love with her, making her realize as she returns his affections that if she'd just shaken out the hair and dumped the glasses before, she might have gotten a hot hero guy that much sooner.

By the end of the movie, she's come out of her shell, cast off her shyness, and come into her own in her own field. She takes a level in badass, amps all the way up to Action Girl, and joins the guy in his field, and they become a Battle Couple.

This often happens to make The Chick more palatable to men (and sometimes, "more exigent" females), and to add that romantic element so that action movies can also be date movies. The recipient of the Adrenaline Makeover is almost Always Female, though a Non-Action Guy can occasionally also get a Makeover.

The Adrenaline Makeover may be seen as contradicting the Be Yourself trope. This trope can also be viewed as implying that a woman is not desirable just as she was; she was not worth noticing or the hero's interest until her adventure-triggered transformation took her from plain to pretty.

Basically Fanservice Pack as Character Development. The opposite of Chickification.

Subtrope of Took a Level in Badass and Fanservice Pack. May involve a Significant Wardrobe Shift. Related to The Power of Love. Compare Xenafication, when there is no Character Development at all and a Fanservice Pack is optional. Contrast Seriously Scruffy (for when a change in someone's appearance makes it clear that the stress is getting to them, rather than making them more badass).