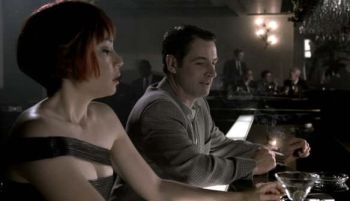 So... what else do you do besides travel to dull cities and talk to women in hotel bars?
Advertisement:

Cypher is a 2002 sci-fi thriller directed by Vincenzo Natali (of Cube and Splice fame), starring Jeremy Northam and Lucy Liu.

The story follows Morgan Sullivan (Northam), a bored and henpecked house-husband who gets a job as a corporate spy in order to add some excitement into his dull routine and annoy his overbearing wife. At first he's thrilled by the prospect of creating a whole new life for himself as a "secret agent" but soon finds that the realities of the industry are somewhat less interesting - recording presentations about shaving cream distribution and consumer trends in the processed cheese market.

However, after he runs into a beguiling and flirtatious woman named Rita Foster (Liu) at a hotel bar, things take a dive off the deep end.

Beautifully shot with Natali's trademark visual flair, this was a smart low-budget neo-noir with a storyline very heavily influenced by Philip K. Dick.

Not to be confused with Cypher Language.