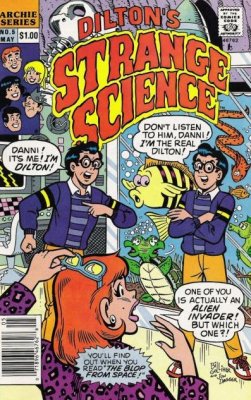 Can you tell which one's which?
Leela: I don't know which one to shoot!
Fry: Flexo, shoot Flexo!
— Futurama
Advertisement:

The heroes encounter a situation where the villain is an imposter of one of their own and/or a sympathetic character. The heroes must find out who is the imposter and who is the real deal.

Typically, the situation will involve the impostor and the real person standing side-by-side, both claiming to be the real one, and the other heroes must use their wits to identify who is who, usually by finding a quality that the faker doesn't have (in comedic examples, a positive quality). Or the real person may ask that their friend shoot both of them just to guarantee they get the imposter (and it's almost inevitable if the person has a super-healing power), which usually results in the heroes shooting the other one, because the impostor wouldn't be noble enough to suggest making the Heroic Sacrifice. This is often parodied these days where the imposter suggests it, knowing they'll assume the noble act to mark them out as the original — and sometimes double-parodied when this ends up outing the imposter since the real person wouldn't be so noble (or it leads to a Preferable Impersonator situation).

In videogames, often the two clones will be desperately attempting to beat the crap out of each other while the player struggles to figure out a means of telling them apart, often with one tackling the other, punching them a few times until the pair rolls over and the person on top switches, ad nauseam (which conveniently allows a very short looping animation to represent the whole fight).

Speculative Fiction variants can get really confusing once you add in the possibilities of magic and/or Applied Phlebotinum: For example, the victim of a "Freaky Friday" Flip must find a way to convince their friends that the person who looks like them really isn't, while the impostor is trying to convince the same friends that the victim is trying to initiate a body swap instead of undo one.

A common subversion is for the protagonist to either shoot in a blind guess that turns out correct, or simply shoot both and see who gets madder. In both situations, the victim of the imposter is likely to be incensed that the hero couldn't tell them from the imposter.

Another subversion is for neither of them to be an imposter but in fact both are two parts of the same person split with Applied Phlebotinum; see Evil Twin and Literal Split Personality. If they are two (visibly) different people but both claiming to be the 'real' whatever-position-would-be-relevant (captain, mother, president, owner, etc), see Judgment of Solomon.

A more comical subversion is when the imposter looks nothing like the person they are imitating, but people still act like they are identical, even if they haven't bothered with a Paper-Thin Disguise. The less the two look alike in this situation the more likely it is that no one can spot the difference.

The real deal's nervous tic can also be useful in exposing the imposter.

May be caused by a Shell Game with people or when a Kill and Replace situation has occurred.

Who's the real Tamaki?

Iris finds herself between two Tamaki, how can she find who's the imposter?

Who's the real Tamaki?

Iris finds herself between two Tamaki, how can she find who's the imposter?