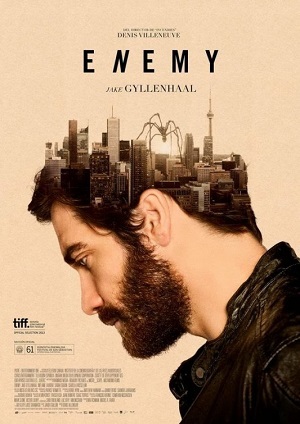 "Chaos is order yet undeciphered."
Advertisement:

Enemy is a 2013 surrealist psychological neo noir thriller film directed by Denis Villeneuve, starring Jake Gyllenhaal, and adapted from the novel The Double by José Saramago.

The film chiefly concerns a history professor named Adam Bell, who lives a normal, quiet life in Toronto, Canada. One night, however, as Bell sits down and watches a film he has rented on a recommendation from a colleague, Where There's a Will There's a Way, he spots an actor who looks exactly like himself briefly playing a bellhop in a scene. Seriously shaken by the uncanny experience, Bell attempts to track down the actor, a man whose name is Anthony Claire and who has only appeared in two bit roles...

A film with a very similar premise, The Double, was released the same year, a black comedy based on another novel named The Double, though written by Fyodor Dostoevsky.

Has no connection to the 2015 Roguelike of the same name.