Film / Under the Skin 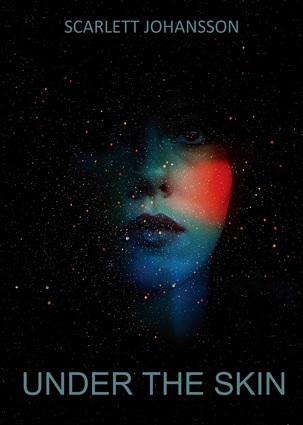 Under the Skin is a Sci-Fi Horror film made in 2013 and directed by Jonathan Glazer. It is a loose adaptation of Michel Faber's novel of the same title. The film stars Scarlett Johansson as an alien who disguises herself as an attractive woman in order to prey on hitchhikers in Scotland.

Glazer worked on the film for over a decade; initially a dense, special effects-heavy concept, the final plot was considerably sparser. Most characters were played by non-actors, and many scenes were filmed with hidden cameras. The film is also very economical with its dialogue, instead choosing to let its visuals do the talking, which contributes to its eerie atmosphere.

Although it failed to make back its budget, the film received glowing reviews. Its abstract plot was subject to mass analysis, and it has since been deemed one of the best films of its decade.

Not to be confused with the Playstation 2 game of the same name (known as Meiwaku Seijin: Panikku Mēkānote Annoying Alien: Panic Maker in Japan).