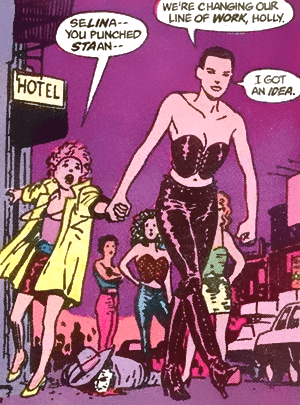 Antipholus: It is the devil.
Dromio: Nay, she is worse; she is the devil’s dam, and here she comes in the habit of a light wench.
— The Comedy of Errors
Advertisement:

The Opposite Trope of a Hooker with a Heart of Gold, a sex worker (prostitute, stripper, adult film actor, etc.) is portrayed as cruel, violent, and/or predatory.

Nevertheless, it's common for this to be a feature of the Sympathetic Murderer. They may even be Affably Evil. Because Rape Leads to Insanity, it's possible for the sex worker to have a Freudian Excuse that may have driven them to whatever cruel actions they commit later. Although not Always Female, they are usually female, therefore The Unfair Sex may apply here.

Therefore, these characters are usually not pure evil, but it's pretty strongly suggested that they fall on the "wrong" side of the Madonna-Whore Complex. Contrast Ethical Slut, which is usually this trope's opposite in several ways: not only is the sex worker specifically unethical, but sex, in this context, will usually be portrayed as violent, demeaning, and oppressive, rather than empowering. They will probably undergo Downfall by Sex, if not outright Death by Sex, so this trope may also co-exist with other "anti-sex" tropes, such as Bondage Is Bad and Sex Is Evil.

Contrast and compare Disposable Sex Worker, where the sex worker is a murder victim.