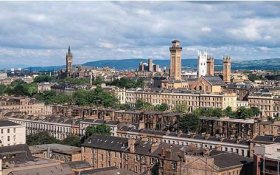 Founded in the sixth century by St. Mungo (also called Kentigern), Glasgow (Glesga to its inhabitants) is Scotland's largest city, with a population of just over half a million living in the Glasgow City Council Area and just under 1.2 million in the surrounding area. It is the third largest city in the British Isles. The city has been growing lately. It has been known as "The Dear Green Place" since its inception, a name that's been retained over the years thanks to the high concentration of parkland. Given the weather, however, it's more grey than it is green most days. In fact, Glasgow is the rainiest city in the United Kingdom. The actual name "Glasgow" comes from the Cumbric glas cau, meaning "Green Hollow".

The history of Glasgow is also the history of the river running through it, the Clyde. Glasgow is situated at what was, historically, the furthest downstream fording point. It is no surprise then, that in more ancient times the city was already a hub of fishing and trade (and occasional raids by the Lords of the Isles and the Irish). After its "official" founding as St. Mungo, it became a cathedral city and a powerful bishopric in the incipient Kingdom of Scotland. Sometime in the twelfth century, the city was given permission to host a fair, which persists today as the Glasgow Fair.

Glasgow grew over the following centuries, the first bridge over the River Clyde at Glasgow was recorded from around 1285, giving its name to the Briggait area of the city, forming the main North-South route over the river via Glasgow Cross. The founding of the University of Glasgow in 1451 and elevation of the bishopric to become the Archdiocese of Glasgow in 1492 served to increase the town's religious and educational status and landed wealth.

However, it was with the Act of Union in 1707 that the city really took off. This gave Glaswegian traders access to the vast markets of The British Empire. By the mid-18th century, Glasgow was the center of world tobacco trading. With industrialization in the 19th century, Glasgow became the world focus for shipbuilding. In 1900, Glasgow alone built more ships than the United States, Germany and Russia combined. It became known as "the workshop of the world" and the "second city of the Empire." Much of this industrial boom was fueled by Irish Catholic immigration, and sectarian divisions and tensions were established then which continue to this day. Radical socialism too became a hallmark of Glaswegian politics - rent strikes and protests during World War I saw the advent of the "Red Clydeside" movement, which marked the only time tanks have ever been deployed on the UK mainland. The awful slums most workers lived in, and the prevalence of crime within them probably led to the birth of the Violent Glaswegian trope in British culture.

The 20th century witnessed both decline and renewal in the city. After World War I, the city suffered from the impact of the Post–World War I recession and from the later Great Depression, this also led to a rise of radical socialism and the "Red Clydeside" movement. The city had recovered by the outbreak of World War II and grew through the post-war boom that lasted through the 1950s. By the 1960s, Britain's lack of investment and innovation led to growing overseas competition from countries like Japan and West Germany which weakened the once pre-eminent position of many of the city's industries.

Since then, Glasgow has experience an economic renaissance, and it is now ranked one of the most livable cities in Europe. However, despite Glasgow's economic renaissance, the East End of the city remains the focus of social deprivation. A Glasgow Economic Audit report published in 2007 stated that the gap between prosperous and deprived areas of the city is widening. In 2006, 47% of Glasgow's population lived in the most deprived 15% of areas in Scotland, while the Centre for Social Justice reported 29.4% of the city's working-age residents to be "economically inactive". Although marginally behind the UK average, Glasgow still has a higher employment rate than Birmingham, Liverpool and Manchester. On the other hand, it is not hard to find examples of grinding urban decay and poverty in the city. One suburb, Shettleston, has the lowest life expectancy in Europenote Not The European Union, but Europe the geographical entity between the Azores and the Urals, even including all the former Soviet republics. Similarly, a combination of enormous, ugly high-rise flats erected in The '60s and The '70s, the old, Victorian-era buildings and tenements, and a large number of derelict industrial works lend the city a disconcertingly strong City Noir aesthetic. Crime remains the highest per capita in Britain, occasionally competing with Manchester. More people are murdered in Glasgow than any other city in Europe, old or new.

That said, Glaswegians have a reputation as the friendliest people in Scotland (not that that is saying much!), and the city is just as cosmopolitan as any in Europe or the U.S.A. Come visit. Just don't mention football...

"The two clubs became a focus for a religious political divide - the Irish tricolor flies over Parkhead, while the Red Hand of Ulster and the Union Flag stand side-by-side at Ibrox."
—Professor Tom Devine

When two football teams in the same city have a bitter rivalry, the two of them are sometimes referred to as a "firm". The two teams in Glasgow have one of the oldest and most bitter rivalries in sport, and are thus called "the Old Firm." The two main Glasgow teams are Celtic and Rangers. Celtic represents the Irish-Catholic "immigrant" population, whilst Rangers represents the "native" Scottish (and occasionally Ulster) Protestant population. Due to tensions dating back to the 19th century, the two teams don't like each other much. Indeed, Strathclyde Police, not to mention Accident and Emergency departments all over Glasgow dread their meetings, which usually lead to a huge number people coming in with knife wounds, bad beatings, or glass injuries. The Troubles in Ireland made the problem much worse. "What team do you support?" is thus a loaded question in Glasgow, which normally can be translated as "Are you a Protestant or a Catholic"note There is an old joke about an atheist who goes to Glasgow, and is asked "Yes, but is it the Protestant or the Catholic God you don't believe in?" The best response is either a hasty retreat or to reply with either "Queen's Park" (whose stadium, being the national ground, may instill enough patriotism in your tormentor to allow escape) or "Partick Thistle", Glasgow's "third" team (who are memetically awful, and even a casual won't lamp a madman, which you clearly are if you support the Jags).. Note that neither of these responses will satisfy a drunk fan whose team has just lost, nor will they be acceptable if you live slap-bang in the middle of either team's supporting areas.

Q: How many Glasgow students does it take to change a lightbulb?
A: 71. One to change the lightbulb, forty to protest on behalf the lightbulb's right not to be changed, and thirty to hold a counter-protest.
—Common joke

Glasgow has two famous universities, the University of Strathclyde and the University of Glasgow. Glasgow is an "old master", whilst Strathclyde is an up and coming new institution. The rivalry between the two is friendly but rather fierce, the usual claim by Strathclyde students being that Glasgow is outmoded, whilst Glasgow students respond that Strathclyde is "not a real university", mocking its origins and former status as a polytechnic, which is roughly equivalent to an American Community College. Students at Glasgow (the city in general, not the university) are infamous for being politically active and (usually) left wing.

"This is your captain speaking. We are now arriving in Glasgow, please set your watches back forty years."
—Frankie Boyle

For those travelling by train, Glasgow Central station is the terminus of the West Coast Main Line and provides regular services to London. In quite possibly the most surprising use of the location ever, it featured in the Season 6 opener of Parks and Recreation.

"All kinds of folk, and folk of all kinds"

Glasgow has an extensive bus service, and the city is notably car friendly for a European city, probably because the M8 and M74 motorways cut right through the middle of it. The most famous mode of transport in Glasgow is the Glasgow Subway, which is known either as the Clockwork Orange due to the color of the trains and its reliability, or the Shoogly, because of the ride quality (or lack thereof). There is one line. The Outer Circles goes one way. The Inner Circle goes the other. Glaswegians are proud of this simplicity. A popular activity amongst students and other drunks is the "Sub Crawl", where one buys a day ticket, they rides the subway between stations, getting off and finding a pub at each one. Conductors and drivers hate people doing this.

Glasgow is normally either portrayed one of two ways: