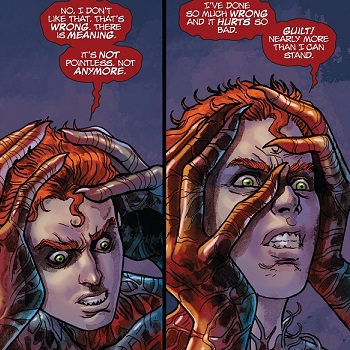 One unlikely, but possible, outcome is that he reacts not with unbearable sadness but overwhelming anger at the heroes for daring to make him "feel like this!" This tends to make him even more dangerous. Nice Job Breaking It, Hero.

Subtrope of Villainous Breakdown. Compare the Villainous RRoD, where overexertion leads to a physical breakdown for the villain. See also Brainwashing for the Greater Good and Alas, Poor Villain. May overlap with Identity Breakdown if part of the trigger to the BSOD are issues or revelations about who or what they are. The trope name comes from the original Blue Screen of Death, of course.