Motorcycle on the Coast Road 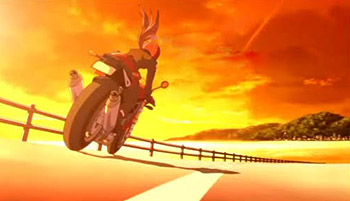 Many shows that have a character (often a "bad boy"/"bad girl" type) who owns a motorcycle will show that character riding along such a coast road in their opening or closing credits. Usually the camera angle is low and facing the sea where the sun rests upon the horizon, casting crimson sparkles over the wavetops below and behind the featured character as they drive across the screen.

For some reason, this is extremely common in Japan, perhaps because many places in Japan (but most famously near Tokyo) feature curving roads on low cliffs that run right up against the Pacific Ocean (or the Sea of Japan, depending on the location). When Hollywood does something similar, the coast road in question will invariably be California SR 1, the Pacific Coast Highway.

See also Riding into the Sunset. If two lovers do this together then it's Romantic Ride Sharing.

After having turned her down before, episode 23 ends with Yusuke inviting Colon to go on "patrol" with him and the two riding off on his motorcycle.

After having turned her down before, episode 23 ends with Yusuke inviting Colon to go on "patrol" with him and the two riding off on his motorcycle.