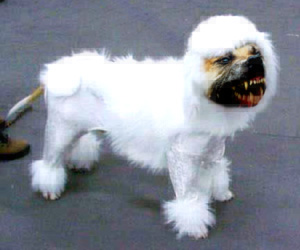 They're not always this easy to spot.
"Look like the innocent flower, but be the serpent under it."
— Lady Macbeth, Macbeth Act 1 Scene 5.
Advertisement:

You meet someone you think is a really Nice Guy/Girl, or perhaps you meet a favorite celebrity for the first time, thinking that they'll be just as warm-hearted and cool as they are on camera. However, something happens to show their true colors, revealing an immature brat, total Jerkass, or even outright villain.

Congratulations. You've just met the Bitch in Sheep's Clothing — the polar opposite of Hidden Heart of Gold.

The Wounded Gazelle Gambit is a favorite tactic of this sort of antagonist, and if they are genuinely evil, expect them to be a Villain with Good Publicity. Can also possibly overlap with Alpha Bitch, or more especially Rich Bitch.

It's also worth mentioning that this trope isn't exclusive to female characters. The title is a play on "A Wolf in Sheep's Clothing," and can apply to any gender. All it requires is a person appears to be nice but is actually cruel and/or manipulative.

In romance plots, the Bitch in Sheep's Clothing is usually the Romantic False Lead, being set up by the plot as appropriate boyfriend/girlfriend or spouse material for a character we know is destined to end up with one of the protagonists. Occasionally, this character was a nice person until they suffered sudden Character Derailment in order to remove them from the equation. In any case, expect them to make an Engineered Public Confession in one form or another.

In some cases, however, a Bitch in Sheep's Clothing can be sympathetic. Many lighter cases involve a scenario in which a fairly flawed yet well-intentioned character makes themselves out to be more benevolent than they really are (especially if they have a high opinion of themselves). More often than not, this charade falls apart and their true persona blasts out, usually in an extreme manner that makes them look even worse than they usually are. In some cases, a Bitch in Sheep's Clothing can lean more towards Jerk with a Heart of Gold if they aren't too busy hiding their unpleasant qualities with an over-enacted facade, instead of showing their genuine (and usually resented) redeeming aspects. Maybe someone will seem like this, then you realize they are just a Lovable Alpha Bitch or a type B Tsundere.

See also: Devil in Plain Sight, Villain with Good Publicity, Warts and All, False Innocence Trick, and Confound Them with Kindness. The Fake Cutie is a subtrope where the (usually young) bitch tries to invoke cuteness or childlike innocence. The Troublemaking New Pet is a related trope where someone takes in a new pet, only to learn that the pet is a huge troublemaker or outright evil and gets rid of it afterward once discovered. A Romantic False Lead is often like this. The Enfant Terrible is also a related trope (possibly the Annoying Younger Sibling with Sibling Rivalry from Hell). Evil All Along is a subtrope comprised of purely villainous examples. Jumping Off the Slippery Slope is for characters who are already morally shady before they commit an unambiguously evil act. For a version specifically concerning actors and actresses, see Nice Character, Mean Actor. For a more extreme version of this trope, see Bait the Dog, where the 'bitch', oddly enough, likes to Kick the Dog.

Not to be confused either with Affably Evil or Beware the Nice Ones, where the person is genuinely nice rather than just putting up a facade. Most especially, do not confuse this with Faux Affably Evil. Such a character does not attempt to hide their evil nature, they simply engage in faux pleasantries while committing evil acts in a deliberately cruel or mocking manner. It could only overlap if the villain initially attempts to disguise their true nature, but then kept up the act after the reveal when they have no reason to do so beyond being a creep.

Contrast With Took a Level in Jerkass, where the character was genuinely nice and became... well a Jerkass. Also compare and contrast Jerk with a Heart of Jerk. Compare Jerkass to One if they are nice to everyone but horrible to one particular person.