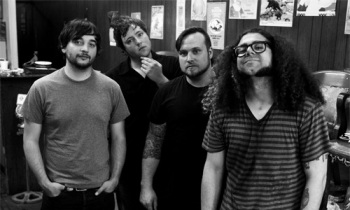 The Band. note Left-Right: Zach Cooper, Josh Eppard, Travis Stever, and Claudio Sanchez
I would do anything for you
Kill anyone for you
Advertisement:

Coheed and Cambria is a prog-rock band from New York, not a kind of cigar. Their concept albums tell a science fiction story taken directly from lead singer/guitarist's comic book The Amory Wars.

Each studio album (bar The Color Before The Sun) corresponds to a chapter in the comics and are released in more or less chronological order.

Here's a list, but, be warned, the titles are ridiculous:

Like most music projects that involve telling a story, it's halfway between Plot, What Plot? and Mind Screw, though the comics help to tell a coherent narrative (though as you'll see below, it can get hard to follow anyway).

The current line-up consists of:

The tropes below cover both the band and comics for convenience's sake.

This band and comic provide examples of the following tropes: