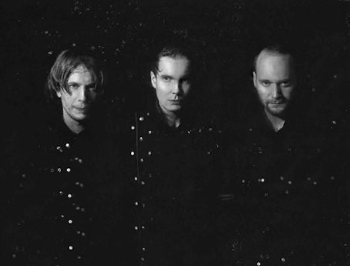 Its members are as follows:

Sigur Rós were formed in 1994 by Jónsi, Georg and Ágúst, taking their name from Jónsi's younger sister Sigurrós (Icelandic for "victory rose") Elin. Drawing their main influences from Dream Pop and Shoegazing bands, the band signed with the Smekkleysa (Bad Taste) label and released one album, Von, in 1997. Known more for its drawn-out, torturous recording than its actual songs, Von largely falls under the banner of Early Installment Weirdness as far as many fans, critics and even the band are concerned. A remix album, Von brigði, followed a year later.

After recruiting classically trained keyboardist Kjartan Sveinsson, the band released Ágætis byrjun in 1999. It was with this album that the band perfected its Signature Style, fully integrating Kjarri's lush orchestration with their Dream Pop/Shoegazing sound and introducing Jónsi's method of playing his guitar with a cello bow (a method previously popularised by Jimmy Page) for a more atmospheric sound. The replacement of drummer Ágúst with Orri Páll Dýrason shortly after the album's release proved not to be too dramatic. They recorded two more albums with largely the same musical style during the early-to-mid-2000s, ( ) and Takk..., swinging between Darker and Edgier and Lighter and Softer, before settling for a more stripped-down, direct sound with Með suð í eyrum við spilum endalaust in 2008.

After scrapping the recordings for the album that they intended to release in 2010 and taking a two-year hiatus, the band dropped Valtari, a much more ambient, dreamlike album compared to Með suð. Later in the year, they announced via a Reddit Q&A session that keyboardist Kjartan Sveinsson had left the band permanently, making the group a trio. According to them, Kjartan said "he had spent his whole life in the band and it was time to do something different", but remained on good terms with his former bandmates. The band then released Kveikur in June 2013, a Darker and Edgier New Sound Album that incorporated elements of industrial music to the point of being described by Georg Hólm as "an anti-Valtari".

Hallmarks of the band's sound include: a wall of guitars, keyboards and violins, Jónsi's high-pitched, Liz Fraser-sounding falsetto voice, use of bowed guitar, frequent use of a made-up nonsense language named "Vonlenska" ("hopelandic"), dramatic crescendos and dynamics, and success despite the fact that most of their audience most likely doesn't understand a lick of their lyrics. Yes, they're that good.