Music / Of Monsters and Men 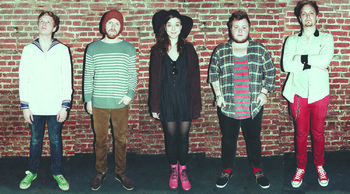 Of Monsters and Men is an Icelandic (but English-language) folk-pop band, formed in 2010 after Nanna Bryndís Hilmarsdóttir decided to add to her solo project Songbird, changing name after co-vocalist/guitarist Ragnar Þórhallsson came up with it. Their big break started with a winning the annual music competition Músíktilraunir in 2010 after just a week of working together, and subsequently they went viral after Seattle radio station KEXP recorded them performing in Raggi's living room.

Definitely not to be confused with Of Mice and Men.

Of Monsters and Tropes