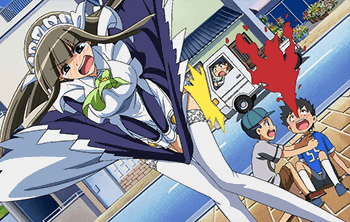 Marilyn Monroe, eat your heart out!
Soul: It's okay, cool guys like me see naked women all the time; I'm used to it.
Blair: Right, I'm sure that's why your nose is bleeding.
— Soul Eater
Advertisement:

Such a nosebleed frequently results from a Panty Shot. Compare Visual Innuendo, Something Else Also Rises, and (the far more realistic) Jizzed in My Pants. Contrast Psychic Nosebleed, where the blood loss is caused by the strain of overusing Psychic Powers, and especially Deadly Nosebleed, which denotes serious physical injury. Both of these overlap with this more than you'd think; arousal could be considered just another way of overexerting yourself, after all. Peeping on naked girls may also result in a Nasal Trauma nosebleed via a Megaton Punch to the face, but that's not part of this trope.

BREAKING NEWS: Every girl is dead. (Okay, not really.)

BREAKING NEWS: Every girl is dead. (Okay, not really.)