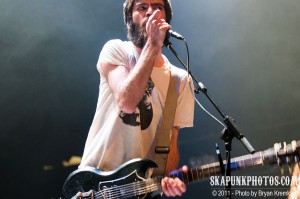 Tramps like us, BABY WE WERE BORN TO DIE!
Advertisement:

Titus Andronicus is a punk/indie band from Glen Rock, New Jersey comprised (as of July 2017) of Patrick Stickles, Liam Betson, R.J. Gordon and Chris Wilson. They have released five albums, 2008's The Airing of Grievances, 2010's The Monitor, a Concept Album based on the dual lives of a young man in New Jersey and a Union soldier in the Civil War, 2012's Local Business, 2015's The Most Lamentable Tragedy (a Mind Screw of an album that can be best described as a mental illness rock opera) and 2019's An Obelisk.

Imagine Bruce Springsteen crossed with Neutral Milk Hotel crossed with The Clash and you're about halfway there.

They are named for the quite bloody and violent Shakespeare play of the same name.