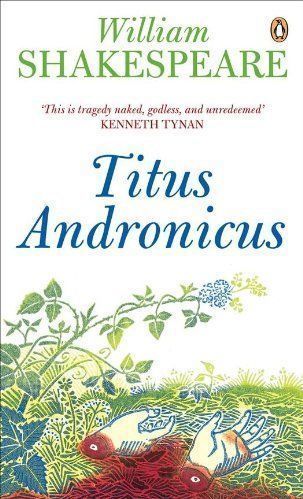 Featuring wanton sex, violence, cannibalism and an "I Banged Your Mom" joke. Truly a masterpiece of English literature.
"Shakespeare as a young writer seems to have gone through a brief Quentin Tarantino phase."
—The Reduced Shakespeare Company
Advertisement:

The Lamentable Tragedy of Titus Andronicus is considered to be William Shakespeare's first tragedy. It is set in The Roman Empire, albeit a very fantastic and fictional version that is melange of different periods and settings. Unlike his other Roman plays, it doesn't use real historical figures as characters. It is noted to have been produced and performed by 1594. It is arguably one of the few Shakespeare plays (alongside A Midsummer Night's Dream and perhaps The Tempest) that is entirely original to Shakespearenote There is in addition to the play, a prose book on Titus Andronicus, and a popular ballad that has survived, and all three are dated to 1594, but nobody knows for sure whether the play, the prose, or the ballad came first, and which came second, and so on. Some scholars believe that the first parts of the play were co-written by George Peele, but this hypothesis is disputed.

At the start of the play, there is a Succession Crisis for the Imperial Throne. The brothers Saturninus and Bassianus compete for the crown, seeking the support and backing of the popular general Titus Andronicus, currently on campaign against the Goths. When Titus returns from his campaign, he brings as captives Tamora, the Queen of the Goths, her servant Aaron the Moor, and her sons Chiron, Demetrius and Alarbus. He has lost all but four of his twenty-five sons in the war with the Goths. On arriving in Rome, to honour his dead sons' spirits, Titus sacrifices Tamora's eldest son, Alarbus. Titus declines the Crown and backs Saturninus, consenting to a marriage alliance between the new Emperor and his daughter Lavinia. Lavinia is already betrothed to Bassianus, and the latter elopes with her. Her brothers support Bassianus against their father's wishes, and in a scuffle, Titus kills one of his own sons, Mutius. In the wake of this, Saturninus announces that he will wed the captive Queen Tamora, who counsels pardon and peace. But now having suddenly gone from captive to queen, she seeks to plot her revenge on the House of Andronicus, aided in part by the scheming Aaron the Moor, who has his own agenda and drive. The resulting Gambit Pileup will bring rot and ruin to Rome itself.

This is one of Shakespeare's most controversial and contentious plays, albeit for different reasons than say, The Merchant of Venice, owing less to its subject matter, and more to its style, presentation, and heavy sex and violence. It was rarely performed and revived until the second half of the 20th Century, when Peter Brook in 1955 mounted a famous production starring Laurence Olivier. More recently, it was adapted by Julie Taymor under the title Titus, with Anthony Hopkins in the title role.