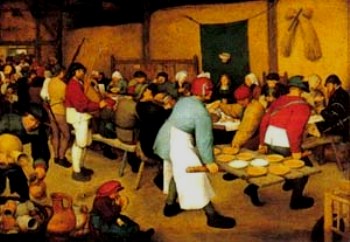 Bruegel's "Peasant Wedding", in which he has a Creator Cameo himself.
Advertisement:

Pieter Bruegel the Elder (circa 1525-1530 – 9 September 1569) was a 16th-century Flemish painter, most famous for his depictions of the life of the common people or peasants. During his lifetime and even centuries later most people looked down upon Bruegel's art. Art critics felt it was nothing more than a vulgar depiction of everyday life without any actual esthetic merit. While many of his contemporaries painted pictures of royals, rich people and religious scenes Bruegel had attention for the lower and undervalued classes of society.

As Time Marches On, Bruegel's paintings and drawings have been Vindicated by History because of their historical importance. His art is almost like a documentary of 16th century everyday life. If it wasn't for Bruegel our knowledge about the ordinary people might have been lost forever. The man depicted their seasonal activities, feasts, work, proverbs, sayings, children's games,... and even minority groups like blind and crippled people.

Art historians have also revalued Bruegel as an artist. On first glance the peasants on his paintings seem to be ugly, almost caricatural depictions of primitive countryfolks. But actually everything has been painted with the greatest eye for realism and detail. Bruegel's landscapes and crowd scenes in particular always keep your attention and often overshadow the actual topic of the paintings. His work shows a universal love for nature and the simple country life without romanticizing it.

The art of Pieter Bruegel provides examples of: