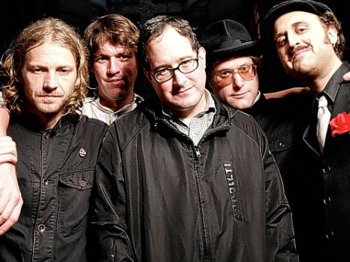 L-R: Bobby Drake, Galen Polivka, Craig Finn, Tad Kubler, Franz Nicolay
"Artistically, I have always been really interested in the hangover; not just the celebration and the confetti, but also the puke in the gutter."
—Craig Finn
Influences:
Advertisement:

The Hold Steady is a highly-acclaimed 21st-century bar-rock band known for the complex and intertextual lyrical mythology woven throughout their albums, following the adventures of an (occasionally) apostate streetrat, a quasi-Rastafari delinquent, a frequently precognitive psychic and a ne'er-do-well pimp. Songs are typically told through the eyes of various, mostly hedonistic narrators, and built over old-school epic riffs.

After the breakup of Craig Finn and Tad Kubler's previous band, Lifter Puller, the two went on and formed The Hold Steady in 2004 with more variable and therefore much more broad lyrical influence (cited by Finn as ranging from John Darnielle to Jay-Z). While not every one of their albums is connected to their iconic Myth Arc, they are connected thematically through drugs, parties, religious allusions, toxic relationships, and the occasional redemption. Craig serves as the band's leading vocalist and Kubler as lead guitar and backup vocals. Their current lineup also includes Galen Polivka on bass guitar, Bobby Drake on drums, and Steve Selvidge on guitar.

In 2016, The Hold Steady celebrated the tenth anniversary of their album Boys and Girls in America with a series of concerts featuring Franz Nicolay, their core keyboardist who left the band back in 2010. Nicolay returned full-time for Thrashing Thru The Passion, making the band a six-piece for the first time.

It's also worth noting that Finn has dabbled in solo work during some of the band's hiatuses. His first album, Clear Heart Full Eyes, was released in 2012 and his second, Faith in the Future, in 2015.

The Hold Steady provides examples of: