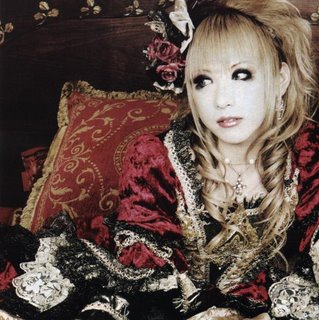 Hizaki (born February 17th, 1979) is a Japanese Visual Kei musician, songwriter, record producer, and fashion model, best known as the lead guitarist for the Symphonic Power Metal band Versailles. Before Versailles, he was a member of several independent bands and had a solo career.

Hizaki debuted in 1997 as guitarist of Garnet Grave. After two years, he and bandmate Hizumi left Garnet Grave and formed Crack Brain, which disbanded in 2002. Hizaki later formed the band Grotesque Romantica with fellow Crack Brain member Airi. They changed their name to Schwardix Marvally in 2003 and released two EPs before disbanding in 2004. Hizaki started a solo career that same year, releasing two more EPs before joining Sulfuric Acid until the band's dissolution in 2006.

After Hizaki Grace Project's last live performance, Hizaki would later support the supergroup Node of Scherzo, together with Kamijo, Jasmine You, Asagi, Juka and Kaya. At Node of Scherzo's first live performance, it was announced that Hizaki and Kamijo would be forming a new band with the members of Hizaki Grace Project, plus Yuki of Sugar Trip. The band would later be called Versailles and become massively successful before parting ways with each other in 2012. Following the hiatus/subsequent disbandment (and now reunion) of Versailles, Hizaki and the other instrumentalists of the band reunited and formed Jupiter with Zin as the new vocalist.