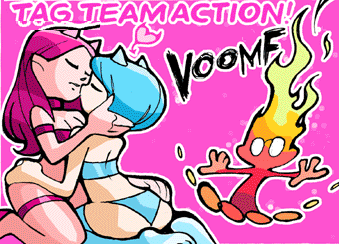 ...Well, hot enough to set you on fire, that is.
"Hey, wadda ya know. Look at that. A lesbian sighting. Ho-hoo, my lucky day...
They're so fascinating. Why is that? 'Cause they don't want us. *clicks tongue*
You gotta respect that."
— George Costanza, Seinfeld
Advertisement:

In some Western countries, it is believed that, deep inside his heart, every straight man is turned on by two or more women interacting sexually; specifically, lesbians. The idea is that if a woman having sex is arousing, then two women having sex is twice as arousing. Plus, there aren't any male rivals in the way.

Since young men are key demographics for networks and advertisers, and because Most Writers Are Male, lesbian fanservice aimed at the former flourishes. See: Catfight; Fanservice Faux Fight; Lovely Angels; Pseudo-Romantic Friendship; Sweeps Week Lesbian Kiss; and Skinship Grope. Also a frequent appeal of the yuri media. Expect a male character to feel that Girl-On-Girl Is Hot when All Men Are Perverts is in play. A much more twisted version of this trope may be Double Standard: Rape, Female on Female - essentialy when the perversion behind this trope is taken Up to Eleven.

This trope is for in-universe character reactions to female/female titillation, not for every time you think a lesbian love scene was intended for male fanservice. For fanservice that doesn't involve a voyeur, see Les Yay. For those who are interested in the romantic and emotional aspects of lesbian relationships, see Yuri Fan. For the rapidly increasing Spear Counterpart, see Guy-on-Guy Is Hot.

In exchange for getting their apartment back, Monica and Rachel agree to kiss for one minute. Chandler and Joey agree it's worth it.

In exchange for getting their apartment back, Monica and Rachel agree to kiss for one minute. Chandler and Joey agree it's worth it.