Series / On My Block 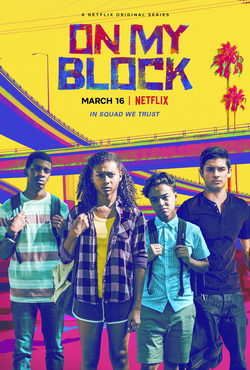 In Squad We Trust.
Advertisement:

On My Block is a 2018 Teen Drama that follows a quartet of bright, street-savvy friends who are navigating their way through high school, including all of the triumph, pain and newness they experience along the way. Lifelong friendships are tested as Monsé Finnie, Ruby Martinez, Jamal Turner, and Cesar Diaz confront the challenges of adolescence and life in their predominantly Hispanic and Black neighborhood, Freeridge, in South Central Los Angeles.

A week before the final season premiered, Netflix ordered a spin-off series, Freeridge, which will focus on a new quartet of friends, this time made up of three girls and a boy. As the title suggests, it will still be set in Freeridge. The new characters cameo in the Grand Finale.

Tropes present in this series

Season 3 also ends on a massive cliffhanger: Monse moves away and the friends disband. They do not talk for two years as seen in a montage at the end of the episode.