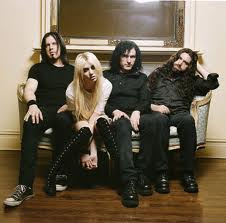 Don't they make you want to die...
Advertisement:

The Pretty Reckless (2009-present) is a alternative rock band created by Taylor Momsen, formerly of Gossip Girl. Their hit songs include "Make Me Wanna Die", "Miss Nothing" and "Just Tonight".

Taylor Momsen spent two years seeking an appropriate producer, and finally picked Kato Khandwala because he was not your typical pop producer. Khandwala introduced Momsen to Ben Phillips, and the three of them began to write songs together. The band had a couple of line up changes before settling on a final band, when they toured with The Veronicas in 2009 for their Revenge Is Sweeter tour.

When they started releasing music, Taylor said that most of their music would be dark but they would also have light moments too. In an interview with MTV, Momsen reported the influences on the band to include The Beatles and Oasis, along with grunge band Nirvana. Taylor then said that her personal influences were Kurt Cobain and Joan Jett.

Eventually they released a promotional single "Make Me Wanna Die" which was featured on the movie soundtrack for Kick-Ass. Their album, Light Me Up came out in August of 2010 (February of 2011 in the US). They have been touring ever since with the Light Me Up and The Medicine tours. Later, they opened up for Evanescence during their self titled tour, released their Hit Like A Man EP, and toured with Marilyn Manson in 2012. In 2013, they toured in support of the future 2014 release of their album Going to Hell and opened for Fall Out Boy in Europe at the start of 2014.

You make me wonna trope: