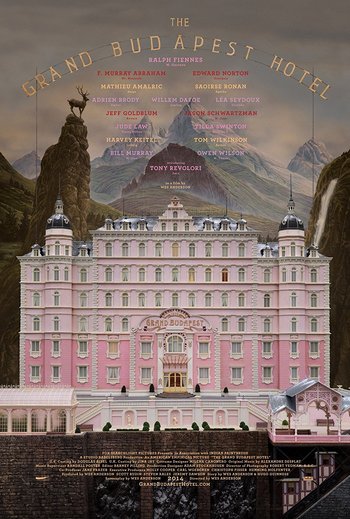 "You see, there are still faint glimmers of civilization left in this barbaric slaughterhouse that was once known as humanity. Indeed that's what we provide in our own modest, humble, insignificant...oh, fuck it."
— M. Gustave H.
Advertisement:

The film takes place in Zubrowka, a Mitteleuropean nation that was "once the seat of an empire" but is now recovering from war, poverty and rule by first fascists and then communists. "The Author" (Wilkinson) relates the story of the Grand Budapest Hotel: in 1968, the Author (played as a younger man by Law) took a trip to the alpine hotel, by then very much fallen on hard times. He met the owner, Mr. Zero Moustafa (Abraham), who told him the story of how the hotel fell into his possession and why he maintains it despite its clear decline.

Mr. Moustafa lived through the glory days of 1932, when he was a young immigrant lobby boy (Revolori) being trained by legendary concierge M. Gustave H. (Fiennes). The hotel is glorious, the clientele is rich, and the concierge keeps everything twirling. But danger strikes in the midst of this paradise when M. Gustave is accused... of murder! What follows is a madcap caper of art, war, secrecy, and, of course, true love.