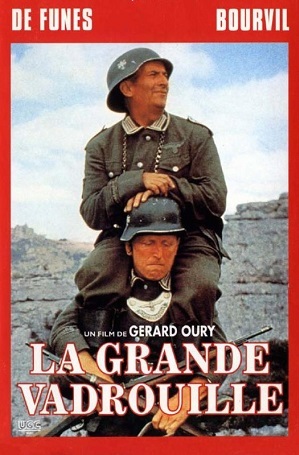 "Tea for Two and Two for Tea..."
Advertisement:

Summer 1942. Over German-occupied France, a Royal Air Force B17 Flying Fortress becomes lost after a mission and is shot down over Paris by German Flak. The crew, Sir Reginald Brook (Terry-Thomas), Peter Cunningham and Alan MacIntosh, parachutes out over the city, where they run into and are hidden by a house painter, Augustin Bouvet (Bourvil), and the grumbling conductor of the Opéra National de Paris, Stanislas Lefort (Louis de Funès).

Involuntarily, Lefort and Bouvet get themselves tangled up in the manhunt against the aviators led by Wehrmacht Major Achbach as the airmen try to reach the Free Zone

with the help of Résistance fighters and sympathizers.