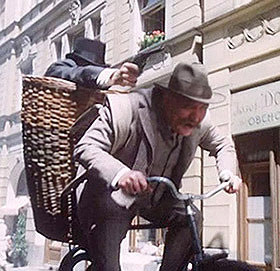 When all you have is a bike.note And a revolver ready to be fired on the bad guy.
Advertisement:

The heroes need to get away from danger, or pursue an escaping villain. Sounds like it's time for a high-speed car chase. The ideal form of transport would be a badass looking car, with insanely high top speeds, and capable of impossible maneuvers. Though chances are the dream vehicle isn't conveniently lying around, so the hero will have to make do with whatever's available.

The substitute vehicle can be very bizarre at times, with popular choices being a fire engine, tow truck, or a tank. Expect the driver to utilize the vehicle's built-in features to gain an advantage, as well as a lot of destruction to the surroundings. Often necessitates a Badass Driver, considering the unfamiliarity of this new vehicle requires skill to operate.

Not to be confused with Cool Car when a character drives an unusual vehicle by choice.

Subtrope of Car Chase Shoot Out, Chase Scene and Hot Pursuit. Compare: Wacky Racing, which is when a race is intentionally organized with unconventional vehicle choices as a gimmick. See also: Improbable Weapon User and When All You Have is a Hammer… for non-vehicle examples. May often lead to Hero Stole My Bike.