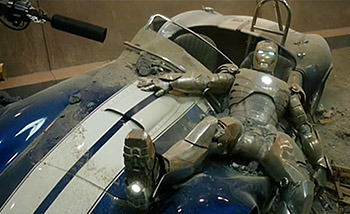 "You are aware that your insurance does not cover this, yes?"
"Shut it, Jarvis."
"He swan dives from 20 floors, lands right on it! What, do I have a bull's-eye on there? He couldn't move over two feet?! Land on the sidewalk, that's city property!"
— George Costanza, Seinfeld
Advertisement:

The higher you are falling from, the more likely it is that a car will be there when you land. Typically it is a parked car, but often it will have a driver inside. Oddly enough and given the same height, a car with a driver in it will suffer less damage than an empty one. The car probably allows the landing to be shown while keeping the TV parental guideline or MPAA rating relatively down. Possibly influenced by the famous "Most Beautiful Suicide"

image. Sometimes the horn may be triggered, or even a hapless alarm. In the more trope-loving media, the car may even turn out to be a Pinto.

Despite the trope name, the victim is unlikely to survive; only The Hero is almost guaranteed to survive.

May or may not overlap with That Poor Car. The Precious, Precious Car is particularly likely to be a victim.

Contrast Pedestrian Crushes Car, which usually ends with the car's destruction without harming the other side of the collision.

Iron Man crashing through the floor of his house once he finishes his first flight with his suit. Thankfully he had his expensive cars below to cushion the fall.

Iron Man crashing through the floor of his house once he finishes his first flight with his suit. Thankfully he had his expensive cars below to cushion the fall.