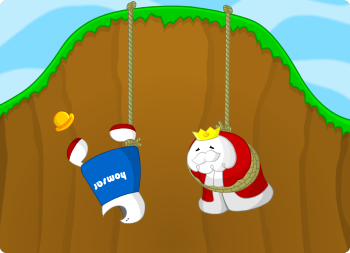 Some cliffhangers awaiting resolution.
Cliff Hanger! Hanging from a cliff!
And that's why he's called Cliff Hanger!
— Between the Lions
Advertisement:

You're on a cliff and fall off. Unless you're a wily coyote, there will be a ledge or branch below that you can hang from. For some reason, the standard cartoon canyon has dead trees growing out of the sheer rock face. It's what Cliffhanger is named from.

Being a dead tree, it will break. Perfect timing for Take My Hand!, or falling to another branch. Another variation is to have another character join you, only to overload the branch. A third variation is having an irate eagle or vulture there guarding its nest. A fourth, scaled up variant, is for it to be a Bus Full of Innocents tilting precariously on said cliff.

This also includes the urban version: hanging from a flag pole. Another way to stop the fall is with a Blade Brake. If the character's items or equipment fall while or before they fall, you're being given a Plummet Perspective. This is one of the building blocks of Climb, Slip, Hang, Climb. Sister trope of The Precarious Ledge. See Teetering on the Edge when it is a vehicle that is hanging over a cliff.