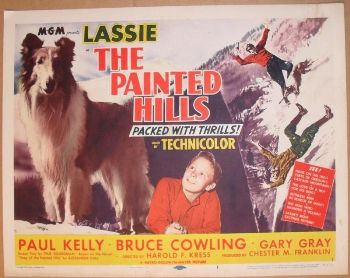 "Lassie in a revenge picture? What were they thinking?"
—Skenderberg, War of the Colossal MST3K Fan Guide

The Painted Hills is a movie starring canine star Lassie as Shep.

Shep is the companion of a grizzled old prospector named Jonathan, who returns from the wilderness to find his partner in his current venture died, leaving behind a particularly whiny kid (Tommy), and an Obviously Evil lawyer (Taylor) in charge of the partnership. Jonathan leaves Shep behind to help Tommy before returning to the mountains, but Shep soon goes on a hunger strike to bring Tommy and Taylor to Jonathan's cabin just in time to save the prospector from dying of fever, thanks to the strange bond between dog and man. While the duo is there, they join Jonathan in panning for gold — and the prospector shows them where he'd been stashing the dust he's collected so far. Inevitably, Taylor catches Gold Fever, and murders the grizzled old guy before Shep's eyes.

Shep immediately begins stalking Taylor seeking vengeance. Lots of contrivances happen along the way, but in the end justice is served, as it must be in movies like this. Afterwards, Shep is ready to die alone in the mountains, but the voice of Tommy in the distance convinces the dog to live.