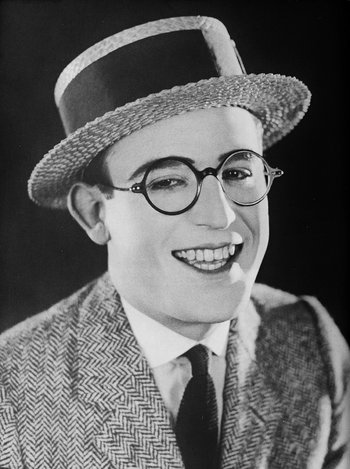 Endearingly Dorky!
"My humor was never cruel or cynical. I just took life and poked fun at it. We made it so it could be understood the world over, without language barriers. We seem to have conquered the time barrier, too."
— Lloyd in 1970, shortly before his death
Advertisement:

Harold Clayton Lloyd (April 20, 1893 – March 8, 1971) was an American comedian, actor, and filmmaker, and one of the biggest stars of The Silent Age of Hollywood. Along with Charlie Chaplin and Buster Keaton, Lloyd dominated silent comedy in the 1920s, leading British film historian Kevin Brownlow to dub him the "Third Genius" of the genre.

Born in Nebraska, Lloyd moved with his father to San Diego after his parents' divorce, and started acting in high school. He made his film debut in 1913 and soon became partners with another up-and-comer, producer Hal Roach. Lloyd first achieved fame with "Lonesome Luke", a fairly obvious imitation of Chaplin's Tramp character that nevertheless proved popular. However, Lloyd grew more ambitious and created his own persona, the "glasses" character that would be a movie fixture for twenty years. The "glasses" character, unlike Chaplin's tragicomic outsider and Keaton's somewhat cynical stoic, was more of an everyman, a determined, go-getting all-American type who usually got both the girl and the happy ending.

In 1923, following the tremendous success of Safety Last!, (the one with the "clock dangling" scene that became Lloyd's Signature Scene) Lloyd left Hal Roach Studios and became his own boss during his period of greatest success, during which he produced more feature films than Chaplin or Keaton. Unlike those rivals, he never took credit as a writer or director of his films despite closely controlling all aspects of production. His films during these years became famous for thrilling, elaborate stuntwork and long chase sequences, all of which were performed by Lloyd himself. Even more impressively, he did this after losing the thumb and forefinger on his right hand when a prop bomb exploded too early.

Lloyd attempted to adapt the "glasses" character for talkies but met with gradually diminishing returns and was essentially retired by 1938. He held the copyright to most of his features and was reluctant to show them in revivals or on television, and consequently his reputation diminished over the decades in comparison with his contemporaries'. Some of Lloyd's features were released on VHS in the early 1990s, and a DVD collection of features and shorts was finally released in 2005. The Criterion Collection currently has the rights to Lloyd's films and is releasing them on DVD and Blu-ray.

Lloyd films with their own TV Tropes pages:

His other movies provide examples of: