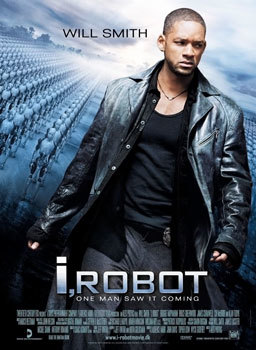 "Somehow, 'I told you so' just doesn't quite say it."
— Spooner, after all hell breaks loose
Advertisement:

I, Robot is a 2004 sci-fi action/mystery movie directed by Alex Proyas (Dark City) and starring Will Smith. It bears no direct connection to Isaac Asimov's book of the same name, aside from the character of Susan Calvin, who is a prominent recurring character in many of Asimov's Robot stories, and the premise of the Three Laws.

The story follows Del Spooner (Smith), a homicide detective in 2035 Chicago. By 2035, robots have permeated every level of human society, and U.S. Robotics is on the verge of the largest robotic distribution in history. Spooner is very much anti-robot (and to some degree technology in general), even considering himself the Only Sane Man while everyone is certain that robots are safe and reliable.

His first day back on the job following an injury, Spooner receives a call from the scene of what appears to be an open-and-shut suicide case; the victim had been holding a holographic transmitter programmed to call Spooner in the event of his death. The victim is Dr. Alfred Lanning (James Cromwell), pioneer of the robotics industry and the man who wrote the Three Laws Of Robotics. Convinced that there is more to the case than meets the eye, Spooner investigates further, and finds a robot in the room Lanning fell from. Only there's something strange about this robot. It threatens his life. It disobeys orders. In short, it has free will, is unrestricted by the Three Laws, and Spooner becomes convinced that this robot "Sonny" (Alan Tudyk) is the key to the mystery behind Lanning's death.

As mentioned above, the plot bears almost no connection at all to that of the book,note which is actually a collection of robot-themed short stories, not a novel though it deals with themes similar to those presented by the book and much of Asimov's work in general. The film itself notes in the credits that it was only "suggested" by the book, as opposed to "Inspired by", or "Based on". It should be noted that I, Robot began life as a script called Hardwired — its connections to the work of Isaac Asimov are the results of heavy Executive Meddling to turn it into a Dolled-Up Installment. It was never intended as an adaptation of Asimov's work, and you'll enjoy it much more if you keep that in mind. Though amusingly, (window dressing aside) the story actually has quite a few things in common with Asimov's The Caves of Steel, involving a murder mystery in a sci-fi setting with robots and a cop main character who is very distrustful of said robots.

Further complicating the issue is that a good portion of the plot bears more than a passing resemblance to the other, earlier, short story I, Robot by Adam Link, in which a sapient robot is accused of the murder of the creator who lovingly "raised" him. Asimov's publisher strangely stole the title of that story for the anthology, leading to the many adaptations of the original story often being confused as being based on a work by Asimov. This film in effect brings the whole thing full circle, being a very loose fusion of both the original I, Robot and the themes of its misattributed author.

Has nothing to do with the arcade game I, Robot.