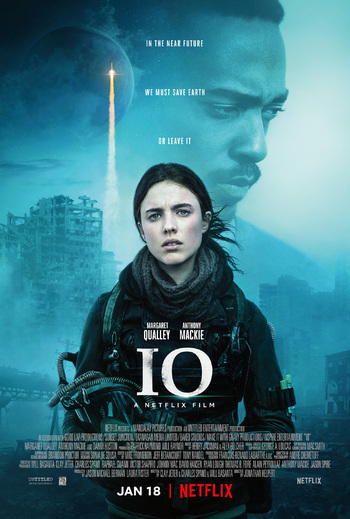 Set in a future where most of the air on Earth has become toxic, the majority of survivors have fled off-world to a space station near Io, a space station orbiting the titular moon of Jupiter. The remaining survivors on Earth have fled to live at high altitudes while awaiting transport to IO. However, the evacuation is winding down, with only one shuttle launch remaining before Earth is abandoned fully by humanity.

Sam Walden (Qualley), the daughter of a famed scientist Dr. Harry Walden (Huston), is one of the few remaining survivors on Earth. She and her father live in an outpost on a high-altitude mountain overlooking an abandoned city, and are trying to determine a means by which humans and animals can adapt to Earth's hostile conditions. Sam quickly but finds her priorities confused by the appearance of Micah (Mackie), a traveller in a hot air balloon who is trying to reach her father and make it to the final shuttle launch.