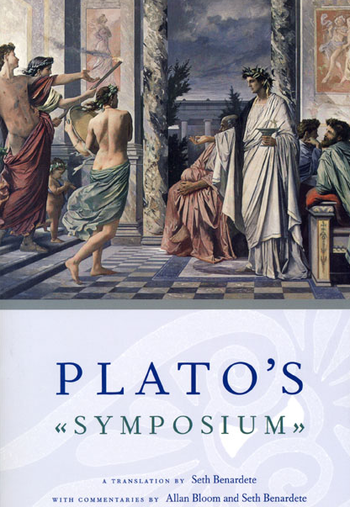 Symposium is a dialogue by Plato, supposedly the account of a symposium or "drinking party" that was hosted by Agathon many years before Plato's report and featured a discussion on the nature of Eros, the god of love (or love personified). It begins with an utterly convoluted frame story where we learn Apollodorus, our gracious narrator, heard it from Aristodemus, who was there but drunk and only remembers some of the speeches with certainty. He also claims to have corroborated Aristodemus's story with Socrates himself, and that Apollodorus only just told the story to Glaucon the other day and he'll only tell it again if the unnamed listener really really insists.
Advertisement:

Discounting Aristodemus's run in with Socrates, the topic proposal by Eriximachus and all the flirting, the speakers are as follows: Phaedrus, Pausanius, Eriximachus, Aristophanes, Agathon, Socrates (and Diotima), and Alcibiades, who like everyone else at this point is utterly sloshed. It doesn't seem to affect the eloquence of their speeches, though.