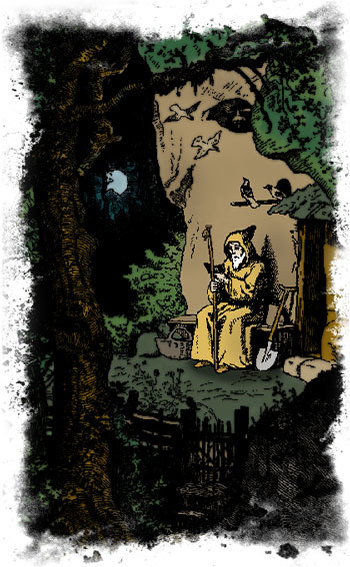 "HERMIT, n. A person whose vices and follies are not sociable."
— Ambrose Bierce, The Devil's Dictionary
Advertisement:

Hermits are folks who don't live around other folks — and they like it that way. They never say I Just Want to Have Friends and they aren't afraid of Dying Alone. Hermits aren't banished or cut off from society as punishment — they willingly chose to leave it, for whatever reason.

Despite their reclusive lifestyle, fictional hermits may be either friendly or hostile. If a hermit is friendly, their reason for living alone will be that they simply enjoy the solitude. If the hermit is hostile, it's because they're misanthropic. On occasion, the hero will encounter a religious hermit.

Most classic hermits tend to live in swamps, jungles, deserts, or caves; and are often shown to be Older Than Dirt. Modern hermits are more likely to live in cities or towns, but be highly, highly withdrawn, to the point of never interacting with the outside world. Hikikomori, Basement-Dweller, and the Reclusive Artist are some examples.

If a hero seeks out this person for guidance or training, chances are you're dealing with a Hermit Guru. Other times when a hero meets up with them on a journey, they may become a kind of one-person Wacky Wayside Tribe.

Self-Imposed Exile is another common reason for becoming The Hermit. Unlike other examples of The Exile, where exile is punishment, this hermit is choosing exile for themselves because they feel they must. Sometimes their continued freedom or survival depends on it. It may be a form of living Off the Grid.

, but not all xian/sennin embody this trope.

Compare The Aloner, for whom social isolation is a terrible punishment, and those Sent Into Hiding. Contrast Hates Being Alone, for when a character really doesn't want to be isolated from others. See I Work Alone for when they don't rely on others.

Has nothing to do with hermit crabs or members of the Hermitcraft Server.