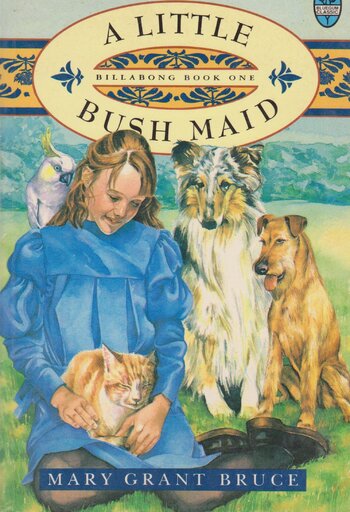 A Little Bush Maid written in 1910 by Mary Grant Bruce, is a work of Australian children's fiction and the first in a series of fifteen novels, collectively known as the Billabong books.

The books, set in outback Australia, are about the adventures of Norah Linton, her father David, her brother Jim, and Jim’s friend Wally Meadows, who reside on the family station "Billabong".

The stories present an idealistic view of life on a station (that’s the equivalent of a ranch, for American tropers) in rural Australia in the early twentieth century. Norah is twelve years old when the first book begins, is in her late twenties at the close of the fifteenth, and remains convinced throughout that there is nowhere in the world like her father’s station Billabong, which continues to be her true home, even after she is married. (She moves no further away than next door.)

The series is characterised by fierce adherence to the Australian way of life, vivid descriptions of the beauty and dangers of the Australian landscape, and humorous and colloquial dialogue. By holding up quintessentially “Australian bush” values such as independence, individual free will, hard physical labour (for women as well as for men), mateship, and hospitality, against more selfish and decadent “urban” or stolid “British” values, the books contributed towards a growing Australian identity in the years before and after the First World War.

The series was also notable for its strong, sensible, competent young heroine, and her close relationship with her father and brother, who never treat her “just like a girl” but rather as a mate with an opinion to be valued. It is also very unfortunately notable for its distinctly racist views of indigenous Australians, and Chinese immigrants. Recent editions have altered offensive content or removed it entirely.