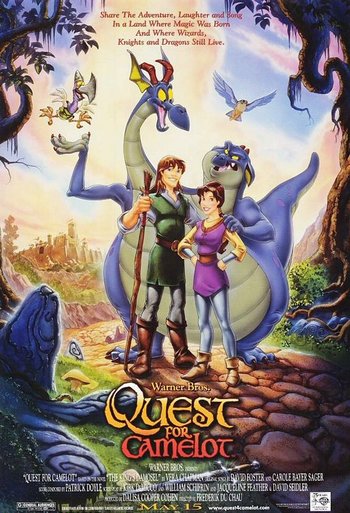 Quest for Camelot (also known as The Magic Sword: Quest for Camelot in international countries) is an animated film released by Warner Bros. Animation in 1998. Its voice cast includes Jessalyn Gilsig as the female lead Kayley; Cary Elwes as the male lead, Garrett; Gary Oldman as the villain, Ruber; Pierce Brosnan as King Arthur; Sir John Gielgud as Merlin; Gabriel Byrne as Kayley's father, Sir Lionel; Jane Seymour as Kayley's mother, Lady Juliana; and Eric Idle and Don Rickles as a two-headed dragon with the names Devon and Cornwall. The songs also got a cast of singers like Céline Dion, Steve Perry, LeAnn Rimes, The Corrs and Bryan White.

The film is loosely based on a book by Vera Chapman called The King's Damosel (AKA The King's Damsel), which in turn was inspired by Arthurian lore. However, the movie has very little in common with the book, with many of the changes (songs, cute animal characters, anachronistic jokes) being done to ape the successful formula that Disney had crafted with its animated films throughout that decade.