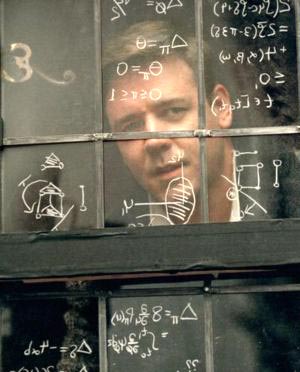 We have chalkboards for that sort of thing.
Imagination does not breed insanity. Exactly what does breed insanity is reason. Poets do not go mad; but chess-players do. Mathematicians go mad, and cashiers; but creative artists very seldom. I am not, as will be seen, in any sense attacking logic: I only say that this danger does lie in logic, not in imagination.
— G. K. Chesterton, Orthodoxy
Advertisement:

Clearly, many writers (and viewers) fear and dread mathematics. On rare occasion, a character is found who possesses a defining trait of having delved deeply into the study of profound mathematical knowledge. These characters are, as a rule, insane. It is not necessarily clear whether advanced number theory is itself destructive to sanity (as with some forms of Formulaic Magic), or whether the insane are drawn to math; nonetheless, the correlation seems to exist.

Many Mad Mathematicians will have a Room Full of Crazy with math equations. They may use their mathematical knowledge for Awesomeness by Analysis or, if they're good enough, Prescience by Analysis.