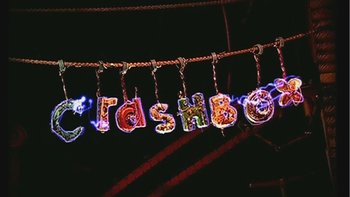 "Well, now that we've got your attention, let the games begin!"
Advertisement:

In the late 90's, HBO broadcast an Edutainment Show from Canada called Crashbox. The show was a bunch of skits about various educational topics held together by the titular Crashbox — a Steampunk computer run by crazy-looking robots. Most of the skits were in Stop Motion (with a few exceptions).

A Canadian-American animated series, Crashbox debuted in 1999 as a part of the relaunch of HBO Family. Produced by Planet Grande Pictures and Canada's Cuppa Coffee Studios, the show lasted for 2 years and 2 seasons, totaling 39 episodes. It is still shown on HBO Family in reruns, and can also be seen on HBO Max.

Well, now that we've got your attention...let the troping begin!