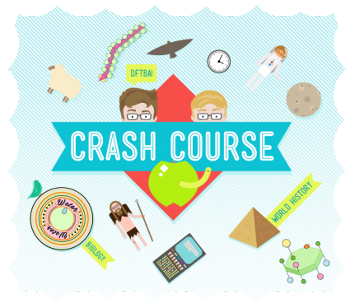 The test will gauge whether you're an informed, engaged, productive citizen of the world ... The test will last your entire life, and it will be comprised of the millions of decisions which when taken together, make your life yours. And everything— everything—will be on it.
John Green, "The Agricultural Revolution"
Advertisement:

is a YouTube channel hosted by the VlogBrothers Hank and John Green, which brings Edutainment Show content to web video. The two set off to give comprehensive 'courses' in subjects that they're knowledgeable about, with more staff and professional production than the video blogs that they're primarily known for.

See also the The Cartoon History of the Universe, which covers more or less the same territory as the World History course, with a similar if different perspective.

The discussion thread is here