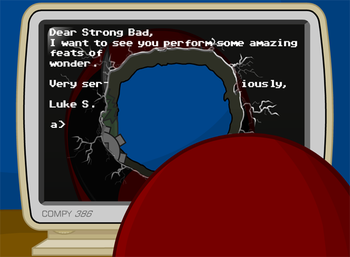 Yes, that's a hole right there in the middle of the screen. And Strong Bad still used it.
Strong Sad: Did your terrible computer explode?
Strong Bad: No, shut up! Look, I'm gonna need to borrow, like, $900.
Strong Sad: Well, I hope that's for a new computer. You could get one like yours at a garage sale for, like... [chuckling] $15.
— Strong Bad Email #33 "gimmicks"
Advertisement:

It's a rusty old computer that takes over a minute to perform a simple operation. A beaten-up computer that restarts unexpectedly and at the last time you would like it to.

This is The Alleged Computer. This computer, to put it kindly, isn't the most viable to use to lollygag or search. In fact, you could probably benefit using an old mobile phone with internet capabilities over this type of "computer". Their best use is probably a novelty doorstop.

If it runs overly slowly or breaks with a single touch (or only works properly with a very strong touch), it definitely fits here. If a computer is actually much more efficient than it looks, see What a Piece of Junk.

Walking Techbanes turn any computer around them into this trope.