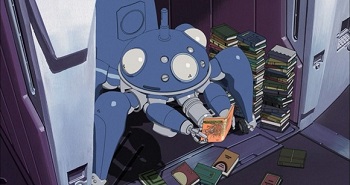 In fictional works, AI most usually refers to artificial general intelligence — a sapient, self-aware computer system capable of independent thought and reason, something we are still a long way from accomplishing. General intelligence is a baseline requirement for a lot of science fiction tropes, such as those listed in the indexes at the bottom of this page.

In the real world, "Artificial Intelligence" refers to programming methods which allow software systems to (very loosely) imitate the reasoning processes of human experts in areas like medical diagnosis, economic prediction, or stock-market manipulation. People who build such systems are more likely to use terms like "deep neural networks" or "recurrent neural networks" than "artificial intelligence" (partly to avoid the stigma that haunted AI research because of unrealistic expectations and broken promises). The computer-generated responses in Video Games are referred to as AIs, despite the fact that these programs aren't actually trying to emulate human thought. See Video Game A.I. for more details, and Artificial Brilliance and Artificial Stupidity when they emulate different extremes of human behavior.

Alternative Title(s): A Is