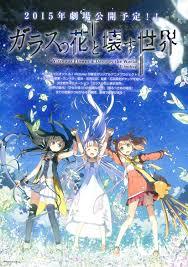 Garakowa: Restore The World is a 2016 Science Fiction film directed by Masashi Ishihama. It centers around two cute antivirus programs named Dorothy and Dual, who are tasked with protecting the Wisdom Box. The Wisdom Box contains backed-up data about all of human culture and society from various time periods, and to do their work clandestinely, they insert themselves as the family and friends of certain people within them. After one particular deletion, the pair meet a girl named Remo, which triggers a series of events that changes everything they knew about the Wisdom Box...

The movie is available for streaming on Crunchyroll, for free users as of January 23rd, 2016.

Garakowa: Restore the World contains examples of the following tropes: