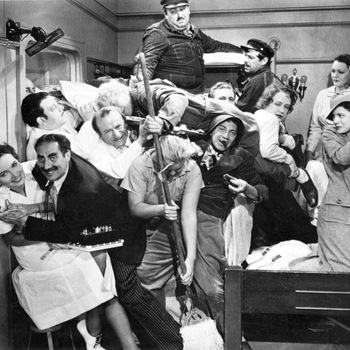 "Hey, is it my imagination, or is it getting crowded in here?"
Advertisement:

A character has just moved into a small room the size of a closet. For added hilarity, it may even be an actual closet. This person barely has room to stand up in, so what's the first thing that happens? He gets visitors. Lots and lots of visitors. It often climaxes with one last person (preferably the comic foil, as per Margaret Dumont) opening the door and everyone tumbling out, Exploding Closet-style.

Originally done by the Marx Brothers in A Night at the Opera (seen right). All other versions of this gag are most likely an homage to the original, which was developed by Buster Keaton who reworked a similar sequence from his film, The Cameraman.

Compare with Clown Car Base. Can be combined with the Closet Shuffle for extra hilarity if the recipient is trying to hide some of the visitors from the others.