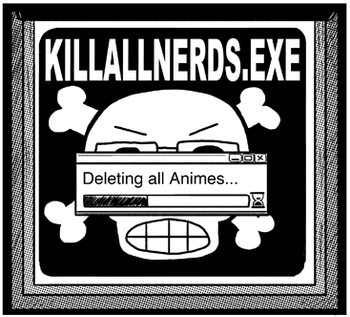 Noah: Is that your answer to everything? "Upload a virus?" The world doesn't work like that, Jake.
Jake: Yeah, but wouldn't it be cool if it did?
— Callahan's Crosstime Saloon
Advertisement:

In fiction, anyone can write a computer virus overnight. While physicists might be more skilled to do so, even journalists demonstrate the skills to write computer viruses that can wipe out a complete technologically advanced alien fleet within minutes. There's no need to find a vulnerability in the system to exploit, no need for a development environment, heck you don't even need to know if the alien computers use ones and zeros (maybe they use threes, tens and tomatoes).

Just to clear things up: Computer viruses exploit security holes/vulnerabilities specific to certain programs — preferably server programs, so you can do a remote attack. In order to discover and exploit such holes, you need to study the software in question — a pretty difficult thing to do if you don't have the source code, access to a copy of the target system allowing you to run a selection of penetration testing tools against it (doing so on the real target may well alert its owners that some dirty work is afoot), or at the very least access to the executable file. More commonly, a virus author waits until a security update by the software developer uncovers a security hole in the program. If you are fast, you can act then and write a virus. Most users are lazy with updates (or company policies might get in the way), allowing the virus to spread to versions of the program missing the security update.

But in order to write a virus, even if you know the security hole, you need advanced knowledge about programming, and that knowledge is the sole domain of computer science students and complete nerds that have been teaching themselves programming since the age of six. Writing and testing a virus so it works the way you want and doesn't get detected prematurely might take a bit longer than an overnight hacking session. (Well, there are exceptionally skilled long trained hackers who might indeed be able to do this.) In any case you definitely need the following things in order to complete this task:

Having said this, there are virus building kits, built by (groups of) black hat hackers as per the above description, allowing essentially anyone with nefarious purposes, capable of wielding a mouse, and only little if any knowledge of the target system (usually called "script kiddies") to whip up a virus, worm or Trojan horse in a relatively limited time. The resulting malware is generally meant to work against known security weaknesses in widely-used programs or operating systems, on the basis that someone, somewhere will not yet have his system patched, and the larger the installed base, the higher the number of unpatched systems and the higher the chance of getting a sufficiently large number of them infected (a measurement of the success of a virus). But even those kits require getting familiar with their workings, just like any other computer program, and they will certainly work no better against the command and control systems of an invading alien fleet than throwing toothpicks at them.

Furthermore, the term "virus" technically only refers to a program that infects other programs or files. If it just infects other machines without attaching itself to programs, it's a worm, and if it's a malicious program that does the damage itself without infecting files first, it's a Trojan horse. No matter what the type of malware, media will typically refer to it as a virus.

Also important to note, not all viruses are malicious, some are benign that cause your computer no damage and simply exist to spread bad jokes, messages or troll you. Even reportedly, malware actually making your system more secure and less vulnerable to flaws and back-doors, owing to the efforts of white-hats using conventional malware delivery vehicles to send out beneficial payloads.