Anime / The Girl In Twilight 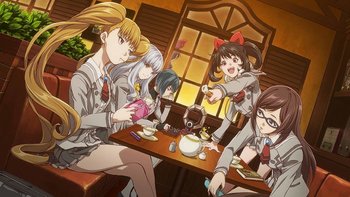 The Girl in Twilight (Akanesasu Shoujo) is a multimedia franchise created to celebrate the 20th anniversary of the Animax television channel, with concept by Kotaro Uchikoshi and character designs by Masakazu Katsura and Hiroyuki Asada. It includes a 12-episode anime produced by Dandelion Animation Studio and Jūmonji, released during the Fall 2018 season, as well as a free-to-play mobile game released for iOS and Android.

Asuka Tsuchimiya is an Ordinary High-School Student known around town for her boundless energy and her love of chikuwa. She is also the founder of her school's Radio Research Society, along with her friends: uptight honor student Yuu Tounaka, tall yet shy Mia Silverstone, popular and rebellious Nana Nanase and the quiet bookworm Chloe Morisu. Every day after school, at 4:44 pm, Asuka and her friends go to their town's sacred tree, set their radios to a random frequency, and attempt to travel to other dimensions. It's all fun and games until the fateful day that their ritual succeeds and the girls find themselves in a golden wasteland. Here, they witness an alternate Asuka, here a hardened warrior, transform to fight invading monsters.

This Asuka tells them that they are in a world under siege by the Twilight, a dimensional plague that consumes alternate dimensions, and that she is an Equalizer, somebody who can manifest their personality into battle armor that lets them fight back against the Twilight. Despite this Asuka's warnings to not put themselves in danger, the Radio Research Society finds themselves traveling to parallel versions of the world they know and joining in the battle against the Twilight.

The anime is licensed by Sentai Filmworks and is currently available for streaming on HiDive.